Wake boarding is a relatively new sport and is described as a cross between waterskiing and surfing.  In 1985, when surfing is already a well established sport, a revision emerged in which the surfers rode their boards while being towed by a boat.  It was dubbed ” Skurfer “.  Due to its size, it offered more flexibility and maneuverability on waves.  It was further developed by Herb O’Brian when he came up with a “hyperlite” board which allowed for deep water start for riders and has been referred to as wake boards.  I have personally witnessed many times as a member of Honolulu, Hawaii’s, Na Alii Water Ski Club that our wake boarders would do a dock start and deep water start as well.  The board is light and can crisscross the waves and depending on the momentum of the rider, he can fly across (airborne).   I found that it was easier to balance because the board was wider than my slalom ski although it moves easily with just a little shift of the body.

Today, this sport has become so popular all over the world and women have excelled in it too.  Tara Hamilton, a native from Orlando, Florida,  was the first Wake Boarder Champion in the X Games and still continue to compete professionally.  She is ranked as the #2  woman wake boarder in the world!  With this, she has revolutionized the sport for women and more names came up in the world of wake boarding. 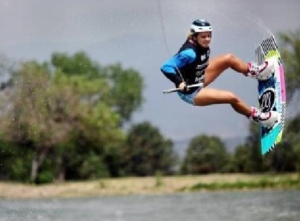 2 thoughts on “Hooray to the women wake boarder….”